During this time, economic activity also increased in the “Northern Triangle” countries of El Salvador, Guatemala, and Honduras. This lends the question—can favorable economic conditions help to keep future crime at bay?

Our chart of the week from a recent IMF staff paper on the relationship between crime and output in the Northern Triangle shows that it does. As the chart depicts, in 2016 in Honduras, a 1 percent increase in observed GDP per capita, driven by higher labor productivity, would lower crime by about 0.5 percent. 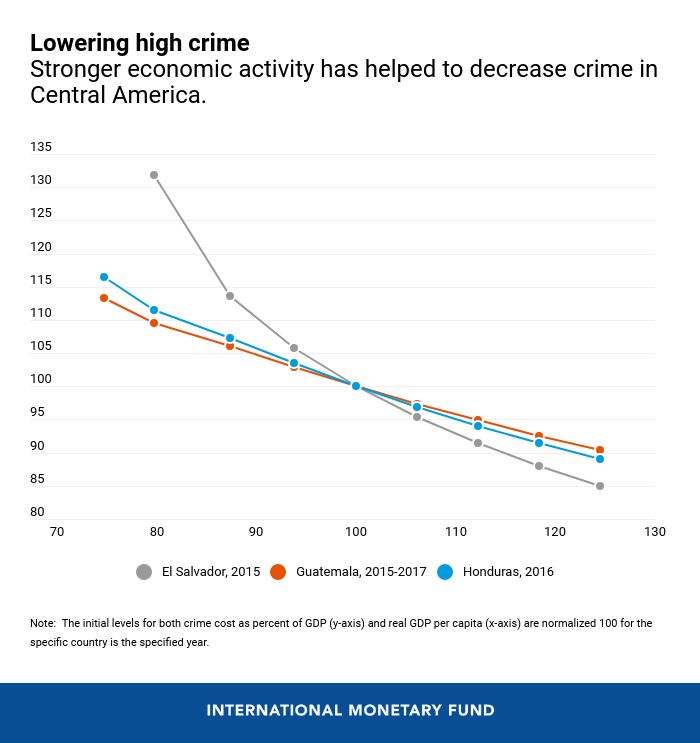 In El Salvador, a 1 percent increase in output decreases crime by ⅔ percent, while in the case of Guatemala the effect is the same as in Honduras. Therefore, the chart suggests that the positive effects of better economic activity on crime are similar for a broad set of medium-crime levels.

By comparing the cost-benefit analysis for an individual’s choice of finding a lawful job versus a life of crime, we find that consistent improvement in the standard of living is key for sustaining crime reduction—especially when crime levels are manageable. The downside of this relationship is, of course, that economic instability or a growth slowdown are detrimental for the security situation.

Our analysis explains why a stronger economy helps to lower crime rates in Central America. First, as productivity and economic activity go up—helping to raise overall incomes—individuals are more incentivized to engage in legal activity, such as paid work in the manufacturing sector, or owning a small business.

This means that criminal activity becomes less attractive. And as more legal jobs become available, our analysis finds that current criminals are less likely to commit high-paying illegal activities, such as extortion, opting instead for job security and stable wages. This has a positive spillover effect as more productive workers and lower security costs increase firm profits, which in turn encourage more firms to enter the market or existing firms to expand—boosting vacancies and employment.

Given widespread poverty and lack of economic opportunities, as well as perceived corruption, it is not surprising that criminal activity becomes a viable option for some, potentially explaining why crime is high in Northern Triangle countries.

While tough-on-crime policies, such as “Mano Dura” in El Salvador, tend to be popular, they often misfire. Instead, policies aimed at reintegration of convicts in the productive economy, such as in the manufacturing or services sectors, seems to be more beneficial.

More broadly, policies that promote more jobs and higher productivity—such as better infrastructure, lower barriers to entry for new firms, and more-efficient tax systems—are key to strengthening and sustaining growth in the region.