Prop. 17: Restoring the Right to Vote to People on Parole

Proposition 17 changes the State Constitution to allow people on state parole to vote. 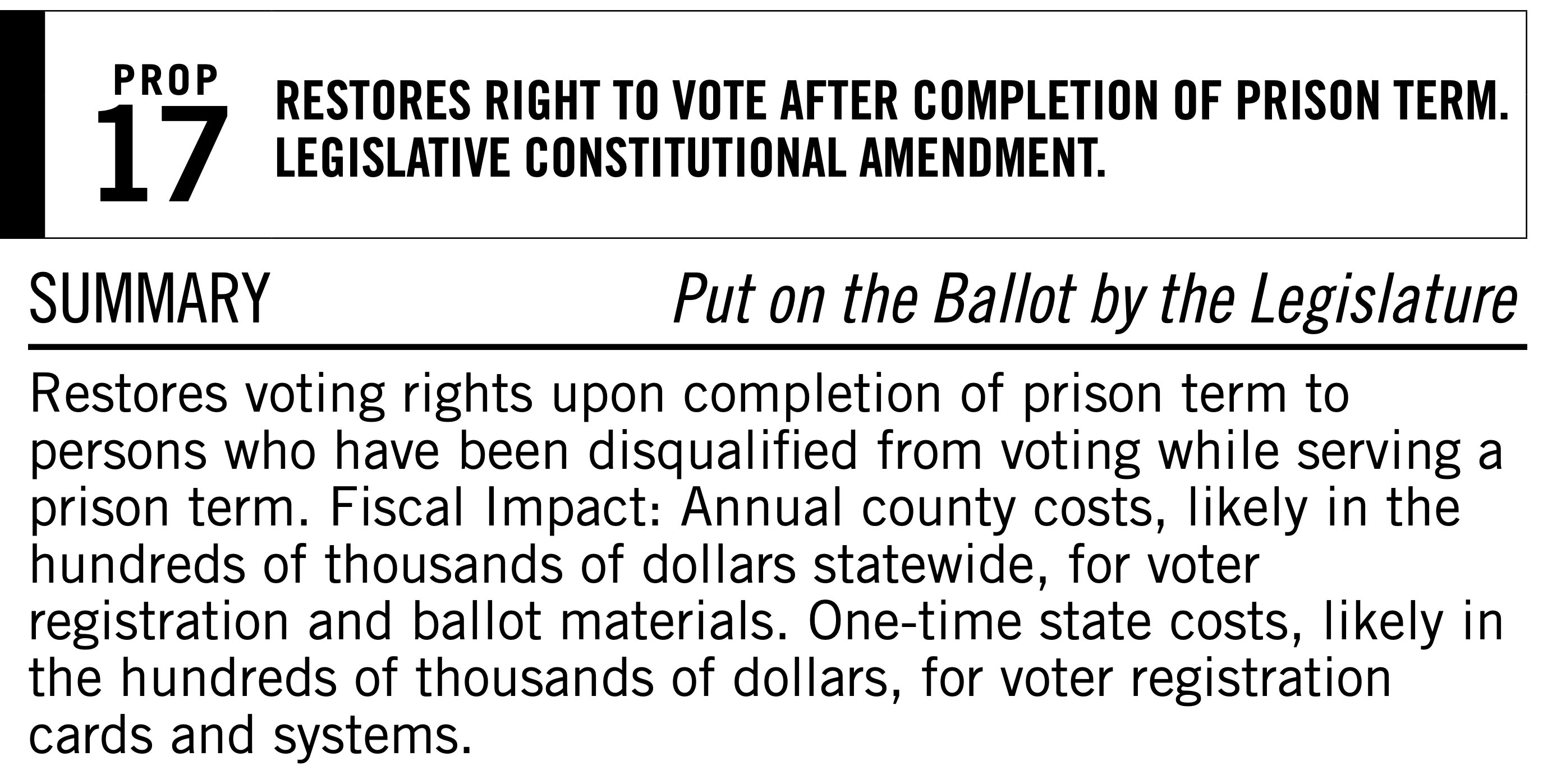 When a person completes their prison sentence, they should be encouraged to re-enter society and have a stake in their community. Restoring their voting rights does that. When people feel they are valued members of their community, they are less likely to return to prison.

Nineteen other states allow people to vote once they have successfully completed their prison sentence. It’s time for California to do the same.

Nearly 50,000 Californians who have completed their prison sentences pay taxes at the local, state, and federal levels. However, they are not able to vote at any level of government.

Parole is intended to be a period of reintegration into the community. People on parole who have completed their prison sentences raise families, hold jobs, pay taxes, and contribute to society in every other way. Restoring a person’s voting eligibility removes stigma and helps strengthen their connection to the community.

People convicted of nonviolent felonies such as car theft or drug dealing are incarcerated in county jails and have the right to vote while serving their sentence. For them there is no parole.

Parole is to prove rehabilitation before full liberty, including voting rights, is restored. If the State does not trust parolees to choose where to live or travel, with whom to associate, and what jobs to do, it must not trust them with decisions that will impact the lives and finances of all other members of society.

Crime victims deserve justice. Granting violent criminals the right to vote before the completion of their sentence is not justice. Californians deserve a justice system where offenders pay for their crimes, prove their rehabilitation, and only then are welcomed back into civil society.

• No committee has been formed to oppose Prop 17.

Prop 20 would add stricter sentencing and parole restrictions for certain crimes and require DNA collection (for a State database) for certain misdemeanors.

Prop 20 would also define 51 crimes and sentence enhancements as “violent” in order to exclude them from the parole review program.

Prop 20 would require local probation departments to ask a judge to change the conditions or status of a felon’s post-release supervision if the felon violated supervision terms for the third time.

Under California law, assault with a deadly weapon is classified as a “nonviolent” offense—along with date rape, selling children for sex, and 19 other clearly violent crimes. As a result, thousands of offenders convicted of these 22 violent crimes are eligible for early prison release without serving their full sentences, and without their victims being warned. Proposition 20 fixes this.

Prop 20 prevents the early release of violent offenders and sexual predators by classifies these 22 crimes “violent” under the law, and requires that victims be notified when their assailants are set free.

Prop 20 takes us backwards. California has made progress, carefully enacting modest reforms to reduce wasteful prison spending and expand rehabilitation, and other alternatives that have proven to cost-effectively reduce and prevent crime. People are demanding more changes to fix unjust policies that disproportionately harm poor people and people of color. Prop. 20 would repeal the progress we’ve made and take us backwards toward the failed, wasteful, and unjust policies of the past.

Prop 20 wastes tens of millions on prisons while cutting rehabilitation programs and support for crime victims. It is a prison spending scam that takes us backwards.

California is facing massive cuts to schools, health care, and other critical services. Spending tens of millions more on prisons right now is a wasteful scam.

Prop 20 means that theft over $250 could be charged as a felony. That’s extreme, out of line with other states, and means more teenagers and Black, Latino and low-income people could be locked up for years for low-level, non-violent crimes.

• Orange County Board of Supervisors

Groups opposed to Prop 20 include:

A “Yes” vote approves, and a “No” vote rejects, a 2018 law that replaced the cash bail system (for obtaining release from jail before trial) with a system based on a determination of public safety and flight risk.

As of 2019, California utilized a cash bail system to release detained criminal suspects before their trials. Suspects paid a cash bond to be released from jail pending trial with the promise to return to court for trial and hearings.

California Senate Bill 10 (2018) was designed to make California the first state to end the use of cash bail for all detained suspects awaiting trials. The legislation would replace the State’s cash bail system with risk assessments to determine whether a detained suspect should be granted pretrial release and under what conditions. The risk assessments would categorize suspects as low risk, medium risk, or high risk.

Now is the time to replace California’s money bail system with one based on safety and fairness.

Money bail is unfair. Under the current money bail system, if you can afford to pay bail, you go free until your trial. If you can’t afford bail, you must stay in jail. So, the rich can go free, even when accused of serious violent crimes, while the poor stay in jail even when innocent or accused of low-level nonviolent offenses.

Prop 25 means decisions will be based on risk to our safety, not a person’s ability to pay. Judges will determine whether a person poses a risk of committing new crimes or fleeing when deciding who is held pretrial. Decisions won’t be made based on the size of the person’s wallet.

Prop 25 makes our communities safer by ensuring jail space is reserved for those who are actually dangerous and shouldn’t be released, not because they’re poor.

Prop 25 will save taxpayers tens of millions of dollars a year. Under the current system, approximately 46,000 Californians await trial or sentencing in local jails because they can’t afford money bail, costing taxpayers $5 million every day.

The money bail system can force innocent people to plead guilty to crimes they didn’t commit.

California’s justice system guarantees that people accused of a non-violent crime have the choice of securing their release by posting bail or by order of a judge. But Prop 25 replaces this right with an automated system of computer-generated predictive modeling based on mathematical algorithms administered by 58 different counties.

Civil rights groups like the NAACP oppose Prop 25 because it will create more biased outcomes against people of color and those from economically disadvantaged areas.

California’s experiment with “zero bail” during the coronavirus pandemic had disastrous results as many defendants were arrested, released back on the streets and committed new crimes within hours, and then rearrested the same day. Prop. 25 will make “zero bail” permanent, which is why law enforcement throughout the State oppose it.

Prop 25 forces counties to create a new bureaucracy to determine who will and who will not get released from jail pending trial. This new State mandate will cost taxpayers hundreds of millions of dollars to implement at a time when state and county budgets are facing historic budget cuts due to the coronavirus.

Prop 25 replaces a bail system that works well at almost no cost to taxpayers with a new system that requires additional court hearings to overrule the computer’s decision, leading to even longer delays in our backlogged justice system.

Groups opposed to Prop 25 include:

• Orange County Board of Supervisors

To learn more about these and other ballot measures on the 2020 ballot, see the official voter information guide HERE: