The letter reads as follows:

Delaware’s Law Enforcement is under attack!

The leadership of the Delaware State Troopers Association, Delaware Fraternal Order of Police, and the Delaware Police Chiefs’ Council denounce Attorney General Kathy Jennings’ refusal to prosecute the 22 violent protesters who were arrested on June 9th in Camden.

As a result of this politically motivated decision, it is readily apparent to the Troopers and police officers we represent that we are now under attack not only by criminals or violent protesters, but by the Attorney General herself.

This decision makes Troopers and police officers less safe, incapable of doing our jobs effectively and our communities and citizens less safe. Her decision sends a clear message that she makes no distinction between peaceful protesters and violent protesters.

We are left with an Attomey General’s Onice that not only encourages and condones criminal behavior by protesters, but justifies and excuses it. In her own statement, she makes it very clear that she sided with the complaints of those arrested and disagreed with the decisions made by the police officers at the scene. She even ignored her own Deputy Attorney Generals’ recommendation who reviewed the probable cause and advised which charges should be placed.

It is truly a dark day when Delaware’s supposed “Top Cop” is willing to ignore her responsibilities and oath of office to try to gamer political favor. If police officers are no longer able to have the support of the Attorney General’s Office when making lawful arrests, how can they be expected to continue to do their jobs?

As the Representatives of Delaware’s Law Enforcement Officers, we have made it clear that we condemn, wholeheartedly, what happened to George Floyd in Minneapolis. We respect and defend the rights of those who choose to peacefully protest and, as always, we will continue to ensure the safety of protesters and the public. We are committed to working with our communities and legislators to address the concerns of police brutality, systemic racism and criminal justice reform. We look forward to participating as members of the task force to work collaboratively to earn the trust and support of all Delawareans. However, we will not remain silent as our Attorney General continues to behave more as a political activist and less as a public servant. 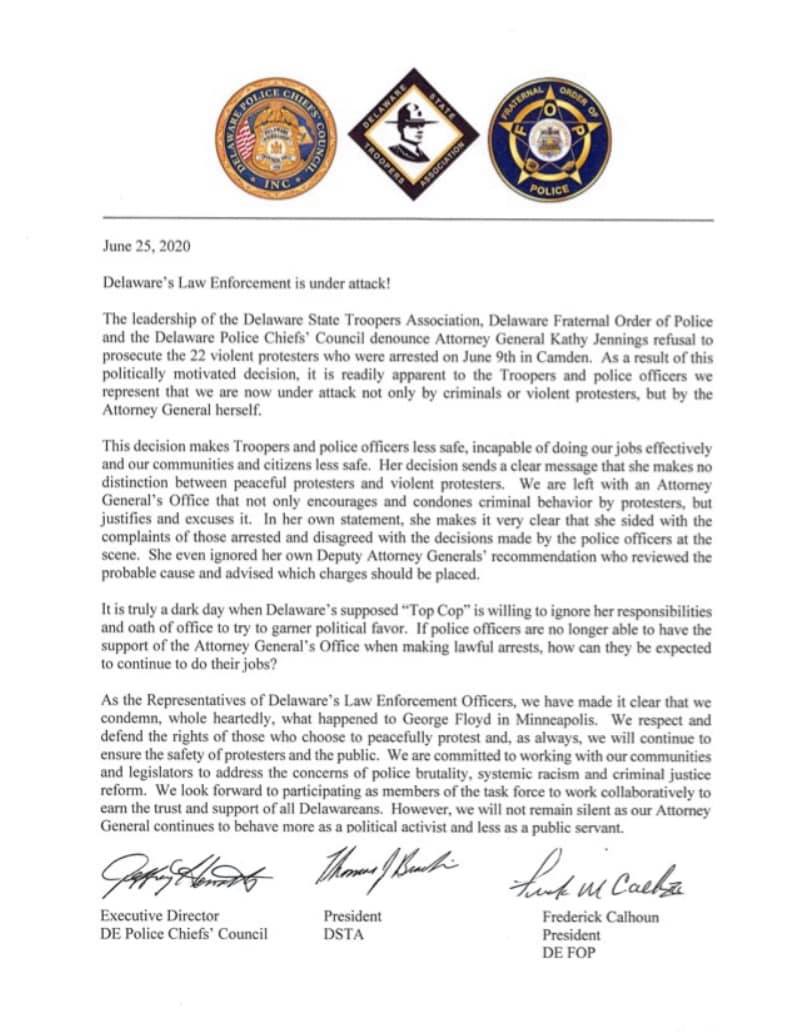