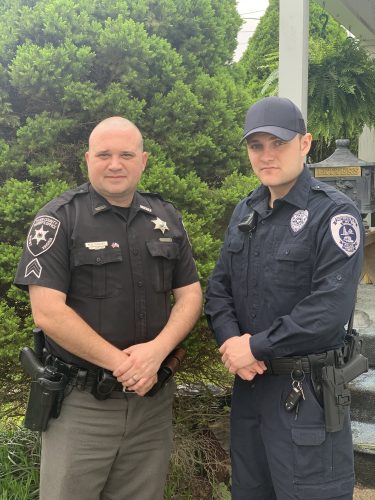 For generations, one local family has been dedicated to serving and protecting the public at-large.

Their story began in Europe in the aftermath of World War II when John Edwin Kelly, a young Army Sergeant, was reassigned to the Criminal Investigation Division. Little did he know that decades later his sons David and Mike Kelly; grandsons Jon Kelly and Mitch Corley; and great grandson Gavin Corley would follow him into what they reverently refer to as “the family business.”

His father’s stories of arresting war criminals compelled David to pursue a career in law enforcement. “I used to listen to my dad’s stories about arresting fugitives in Europe after the war and I dreamed of making a difference, too,” he stated. “My dad played a major role in bringing these people to justice. He was my hero!”

These stories and this longing to make the world a safer place would establish a lineage of public service four generations strong.

David, who now serves as a representative in the West Virginia House of Delegates, began his career as a Correctional Officer at the Pleasants County Jail. A few years later, he was hired as a deputy sheriff in that county and graduated from the West Virginia State Police Academy in 1983 with the 49th Basic Class. In 1988, he was duly elected Sheriff of Pleasants County and served in that capacity for two terms. His older brother, Mike, also worked as a deputy for the department during this time.

“In those days it was rare for brothers to work for the same department,” David commented. “But for eight years we worked side by side.”

The eldest Kelly brother also worked for several years as a deputy for the Ritchie County Sheriff’s Office before becoming Chief of Police in Paden City. He is now retired and lives in Parkersburg.

Throughout his career, David has remained committed to his brothers and sisters in blue. “The law enforcement community is a family. We share a lifelong bond that nobody else can understand.”

For David, the uniform he proudly wore throughout his career represents everything that is honorable. “It represents our freedom and our commitment to justice and peace.”

Sgt. Jon Kelly is a Correctional Officer at Northern Regional Jail where he helps to oversee the custody, supervision, safety and regulation of those who have been convicted and sentenced to imprisonment. This branch of the law enforcement community often goes unnoticed, but for the Kelly-Corley family, this extension of the brotherhood commands as much respect as those who patrol in the community.

Sgt. Mitch Corley may have been an unlikely candidate to become a law enforcement officer, but fate would lead him down this path, thrusting him headfirst in public service.

“When I graduated from high school, I wasn’t sure what I wanted to do with my life,” he explained. “I just knew that a 4-year college wasn’t for me, so I went out and got a job instead.”

But after a few months of flipping burgers at a popular fast-food restaurant, Mitch enrolled in a local community college and began taking classes to become an Emergency Medical Technician and Industrial Firefighter. He put his certifications to good use as an EMT, while volunteering at a fire department near his home.

After applying to several departments, Mitch was hired as a Patrolman for the Sistersville Police Department in 2008. Soon after accepting the job, Mitch met his wife Jonay and thus became a part of her family’s lineage.

He graduated from the Academy in October 2009 as part of the 139th Basic Class and joined the Tyler County Sheriff’s Office a year later.

Since he began his career in law enforcement many aspects of the job have changed. “This day and age police officers are under more public scrutiny than ever before.” Mitch stated. “But the people of Tyler County remain pro law enforcement.”

Patrolman Gavin Corley is the newest officer in the lineage. Last December, he was hired by the same department where his father began his law enforcement career. He recently graduated from the Academy with the 183rd Basic Class.

“Being from a law enforcement family which extends back for generations is an awesome responsibility,” Gavin remarked. “I want to make my family proud and serve my community with honor.”

Integrity, fairness, respect, honesty, courage and compassion are among the core values instilled in each officer at the Academy. It’s these guiding principles Gavin will implement throughout his career.

For Mitch, seeing his son in the same uniform he wore more than a decade ago was surreal. “I never dreamed my oldest son would follow me into this profession. But seeing him in that uniform the day he graduated from the Academy brought a feeling of pride that I will never forget,” he commented. “The training at the West Virginia State Police Academy is very rigorous and not everyone can make it through the program.”

In November, Mitch pinned his own Sistersville PD badge on his son’s chest. “As a father you always want to pass things down to your children. I thought it was very fitting for him to wear my badge because he is traveling down the same path.”

When David learned his grandson was following in his footsteps, he was admittedly guarded. “I am aware that the world in which we are now living is very different than it was when I was in uniform,” he said. “But I am very proud of Gavin and his accomplishments. I know he will make a fine officer.”

David is equally proud of his sons for upholding the virtues of honor and justice. “I couldn’t be any prouder of Jon and Mitch. They are both true professionals who take their jobs seriously. They both continue to be successful in their chosen law enforcement paths,” he stated.

As a delegate, David has dedicated himself to supporting legislation that provides essential training and equipment for law enforcement and correctional officers throughout the state. “These young officers are seeing things today that we would not have imagined 40 years ago. I will continue to do everything I can to make sure my sons, my grandson and our brothers and sisters in this field have everything they need to get the job done safely.”

“We train the best and the brightest in West Virginia, and we are blessed to have one of the top training facilities in the nation, staffed by individuals who have dedicated themselves to this end. That was true when I went through, it was true when Mitch was there, and it’s even more so today.”

He continued, “When I went through the Police Academy there was a hat on a podium with an inscription that read: if you want it, earn it. No matter what color or style police hat you wear, when you leave the hill, you’ve earned it. And you’ve earned my respect.”

Although law enforcement has changed in many ways since the first in this lineage donned a uniform and duty belt, each officer in this clan upholds his family’s longstanding approach to principled, respectful policing.

The choice of a son to follow his father into his chosen profession speaks volumes of the character of the elder. In this blue-blooded family, “like father, like son” is the highest compliment to be paid.