In 2003, while investigating a news story about a man on Death Row, then-television news anchor Lee Marshall discovered the man was a product of Alabama’s foster care system.

Marshall, who was herself adopted as an infant, hit on an alarming statistic from Pew Research: Between 75 and 80 percent of kids in the juvenile justice system come out of foster care. 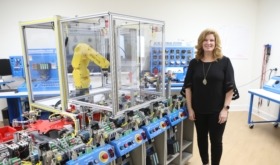 Lee Marshall: “KTECH is a gateway, an opportunity for kids aging out of the system, to take another path.” (Photo/Steve Babin)

Having grown up in a loving family and having the benefit of a good education and a successful career, she was appalled at that statistic.

More than 16 years later, recent statistics from Foster Care 2.0, and confirmed in stats quoted in an article written for Teen Vogue in May 2018, that number is now solid at 80 percent.

Furthermore, by age 17, more than half of the youths in foster care have experienced an arrest, conviction, or overnight stay in a correctional facility. More alarming numbers:

“I saw this happening, like a flood rushing the prison gates and pouring through it,” said Marshall. “I searched for somebody, somewhere, doing something to stop it, but came up empty.”

Shortly thereafter, Lee Marshall retired from television news after 20 years to start her Kids To Love foundation. Kids To Love seeks to wrap their arms around foster kids no matter what age or under what circumstances they enter the foster care system. They provide supportive programs, all with a hidden curriculum: to give them food if they don’t have it; to provide transportation if they need it; and help them find housing if they are on the streets. But no one was offering solutions to just “Stop it.”

“As a former journalist, I know what I don’t know, so I did some research,” Marshall said. “I needed an exit strategy for these kids, especially those aging out of the system.

“I created our KTECH workforce training initiative to stop it by getting them into jobs. Our overall catalyst is to invest in, educate, and sustain these kids. KTECH is a gateway, an opportunity for kids aging out of the system, to take another path.” 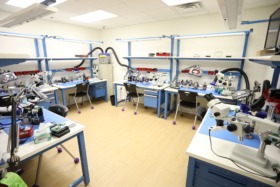 Daily KTECH classes feature mechatronics in the mornings and robotics in the afternoon. (Photo/Steve Babin)

In 2014, a Kids To Love board member connected Marshall with Fred Rascoe, dean of Career and Technical Programs at Motlow State Community College. He runs the career readiness department which includes Bridgestone classes in mechatronics, a multidisciplinary form of electrical and mechanical engineering systems that trains people for the newest jobs in advanced manufacturing. Mechatronics rethinks traditional blue-collar manufacturing into a clean, skilled environment.

“Several community leaders and members of the Board of Directors went with me to see how their program worked,” said Marshall. “They were stating 100 percent job placement for graduates from the classes and, by all accounts, it looked good.”

Rascoe became her mentor and when she told him how she wanted KTECH to look, he showed her what they needed and how to set up the equipment to be successful.

“I had a vision of what I needed to make it work but I knew the mountain I would be climbing. All I needed now was a building and half a million dollars in equipment,” Marshall said.

Kids To Love was operating out of several locations with a warehouse in one place, her administrative offices in an old Intergraph building, and to make the classes work, she was praying for a way to bring everything under one roof.

Just a few months later, in November 2014, she met Louis and Patty Breland of Breland Properties. Patty was adopted and she shared Marshall’s vision for KTECH.

The Brelands donated a 13,000 square-foot investment property on Castle Drive in Madison to Kids To Love.

“It was formerly a Jump Zone painted in primary colors and smelled like dirty socks, but I have never been so excited about a building in my life,” said Marshall. “Nearly all the materials for renovations were donated and in April, Dorothy Davidson of Davidson Technologies bought all the required equipment.”

KTECH has two fulltime instructors and classes are daily with mechatronics in the mornings; robotics in the afternoon; and soldering and solid edge, a 3D CAD technology that provides solid modeling, assembly modelling and 2D orthographic view functionality for mechanical designers, taught several hours per week. Students leave KTECH with all four industry certifications.

KTECH has an articulation agreement, that is, their college level classes qualify as transferable college credits if a student wants to transfer to Calhoun Community College, Wallace State, or Motlow. Calhoun and Wallace State give 12 of the 16 hours credit, but Motlow gives the full 16 because the program is patterned after it.

“We want kids to have an easy transition into a job after we certify them, so we set up the labs just like they will be at a job, in fact, the robotic lab is exactly like the new labs at the new Mazda Toyota plant,” Marshall said. “Students can go straight to work making $30,000 a year.”

In 2018, KTECH expanded the mechatronics lab to include the largest robotics training classroom in the state of Alabama. There are four robots and a virtual computer robot just like the ones they will see at the Mazda Toyota plant.

“I can’t help kids the way I want to help them if I accepted government funds,” she said.

While KTECH’s priority is on kids aging out of the foster care system, it is not limited to that. Marshall said it is a training vehicle for anyone in the community who can use the skills.

“We have put veterans in there who are transitioning back into the workforce and they bring a tremendous synergy to the kids,” said Marshall. “My kids have a tendency to quit when it gets hard or to quit when they don’t want to do something. 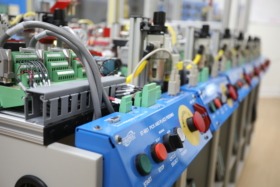 “If I put a vet in here with one of my kids, that vet comes from a brotherhood. They will say, ‘I’ve got your back. We’re in this together and quitting or failure are not options.’”

The program also offers classes to the underserved or under-resourced people.

Students must have a high school diploma or GED to interview and Marshall said it is a tough love proposition.

“We have a strict interview process and only take about half of those that interview; however, we have a 100 percent completion rate,” said Marshall. “We give them an opportunity. What they do with it is up to them.

“For us, it is not about having butts in a seat – it is about completion. We kick them in the butt while they are here, but we are by their side at graduation.”

Kids To Love has awarded more than 700 college scholarships in its first 16 years, and KTECH has awarded more than 100 certifications in the first three years of its existence. KTECH is an alternative for foster children who are not cut out for college or don’t have the support to go to college, but they still need a skill set to be independent.

For 16 years, Kids To Love has implemented numerous programs in support of foster children of all ages throughout Alabama, in 60 counties in Tennessee, and with a growing presence in Mississippi and Georgia. Programs for young children like More Than a Backpack and Christmas For the Kids provide food, school supplies, and new clothing to wear. Life Lab teaches older kids, essential skills like how to create a budget, balance a budget, write a resume and dress appropriately for a job.

“I asked a judge in Montgomery, ‘What is the number one thing you see in my kids when they come before you?” said Marshall.

“He said, ‘Armed robbery with drugs a close number two. It may surprise you, drugs isn’t number one, but they get a gun because they need a gun to get into the drug business,’” Marshall said he told her.

According to Bennet Wright, Chair and Executive Director of the Alabama Sentencing Commission, it costs $44 a day to house an inmate in Alabama. Armed robbery is a gateway crime with an automatic 20-year sentence if convicted in Alabama. A 20-year sentence costs the taxpayer over $321,000.

Right now, there are more than 1,500 kids over the age of 14, about to age out of the system. The cost of that many kids aging out of foster care and going into the juvenile justice system will cost taxpayers about $365 million if nothing is done to stop it.

KTECH is one step to help stop this trend.