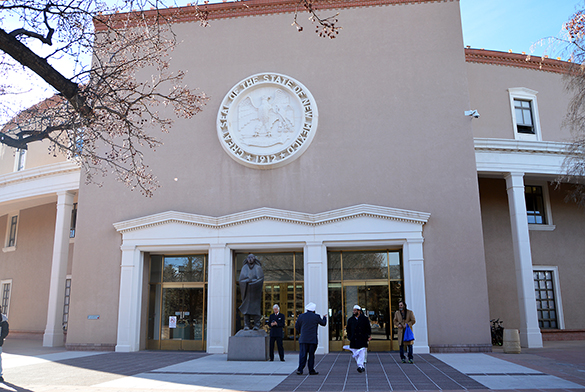 SANTA FE – In response to communities around the state pushing for more to be done to curb violent crime in New Mexico, Saturday The Safer Communities Act, a bipartisan public safety package, passed the House Judiciary Committee.

“Too many of my constituents are fearful in their own neighborhoods. No community should have to live in fear,” Rep. Hochman-Vigil said. “That’s why we’re holding criminals accountable and providing our first responders with the tools and support they need to keep our communities safe.”

“This comprehensive, bipartisan package addresses many of the public safety concerns of our communities,” Rep. Matthews said. “We have to think about a broad package that both deters criminals through increased penalties and supports our law enforcement officers and first responders so they can do their job.”

Included in the comprehensive and bipartisan package are the following:

House Bill 6: a bill to support first responders and law enforcement officers by creating the legal presumption that a diagnosis of Post Traumatic Stress Disorder is attributable to their jobs. This commonsense bill lessens the stigma around PTSD and any compensation barriers, so first responders can receive the support they deserve.

House Bill 35: a bill to increase felony penalties on criminals who use firearms to commit crimes, House Bill 35 is designed to deter the use of firearms in crime, making it less likely that people are killed or seriously injured.

House Bill 113: a bill carrying increased penalties for convicted felons found in possession of a firearm while committing a new crime. This bill carries with it a sentence of up to 3 years for a first offense, keeping our communities safe from repeat offenders.

House Bill 19: a bill that puts more boots on the ground in our cities and towns with law enforcement who are trained in community policing. This bill creates incentives for municipalities and counties to apply and receive funding to retain and recruit officers to be trained in preventative community policing tactics. Funding for this program is funded by the Law Enforcement Protection Fund.

House Democrats are committed to keeping New Mexico’s communities safe by tackling the root causes of crime and giving our first responders the tools and resources they need to do their jobs. The Safer Communities Act passed the House Judiciary Committee in a unanimous vote and now heads to the House floor.